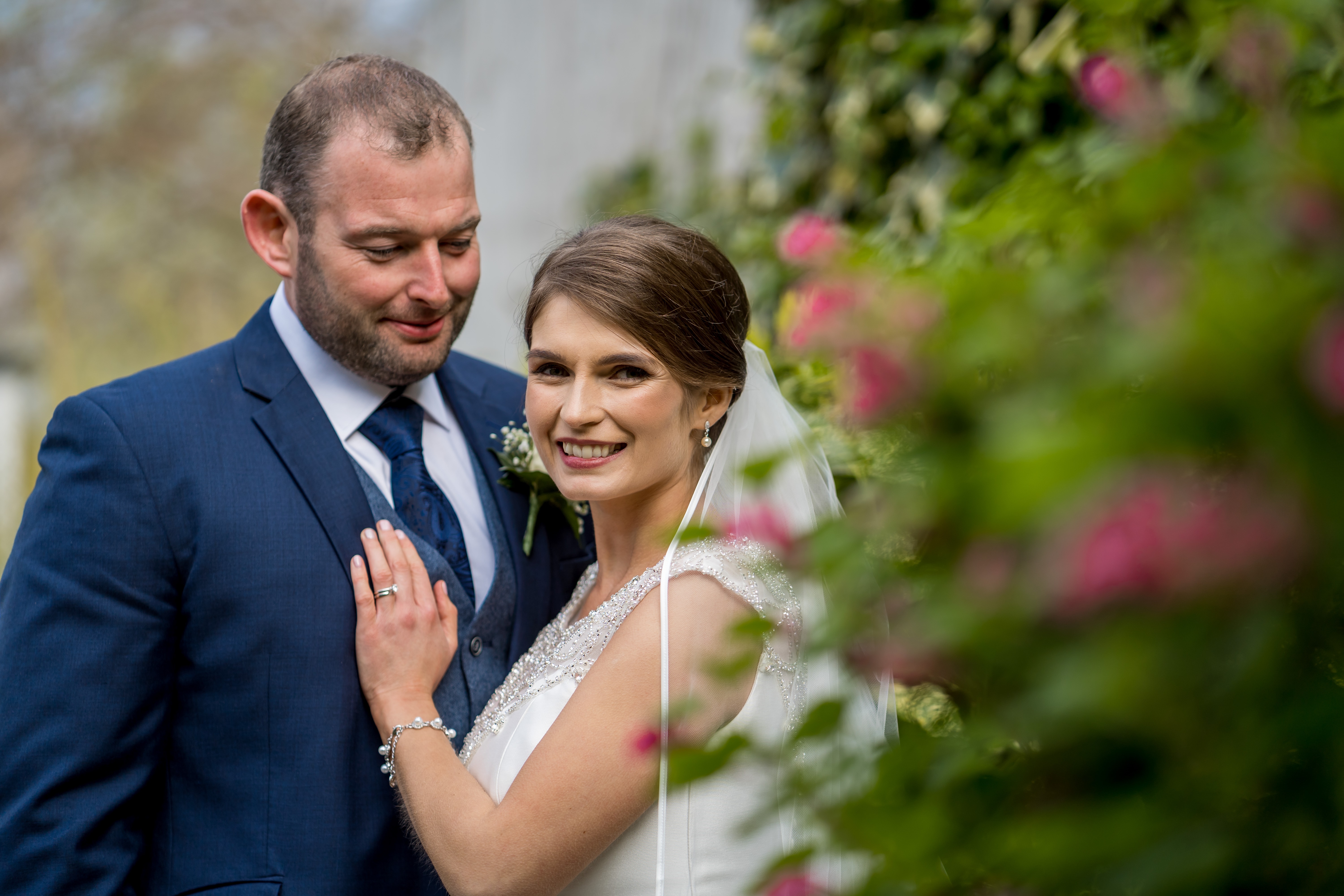 Christine and John Paul were at a friend’s wedding at the Newpark and loved it. They had met at a camogie team fundraiser in Knockananna, the only night John Paul had been in that pub in Knockananna.

“The rest is history. We went away for a weekend for my 30th Birthday and on the first night we went for a walk in the hotel grounds. John Paul got down on one knee. It was extremely romantic.”

They got engaged in January 2018 and married in April 2019 and Christine felt this was the ideal length of time.

“We didn’t feel we were engaged for ages, but also we were not under pressure and stress to get things organised. We attended the Newpark wedding fair, chatted with Nikki, and the Newpark ticked all the boxes …. the beautiful venue, the food, friendly staff, fabulous rooms. And it was also good value.”

And did it turn out to be the best day of their lives ?

“I wouldn’t change a thing. From start to finish we enjoyed every minute of it.” 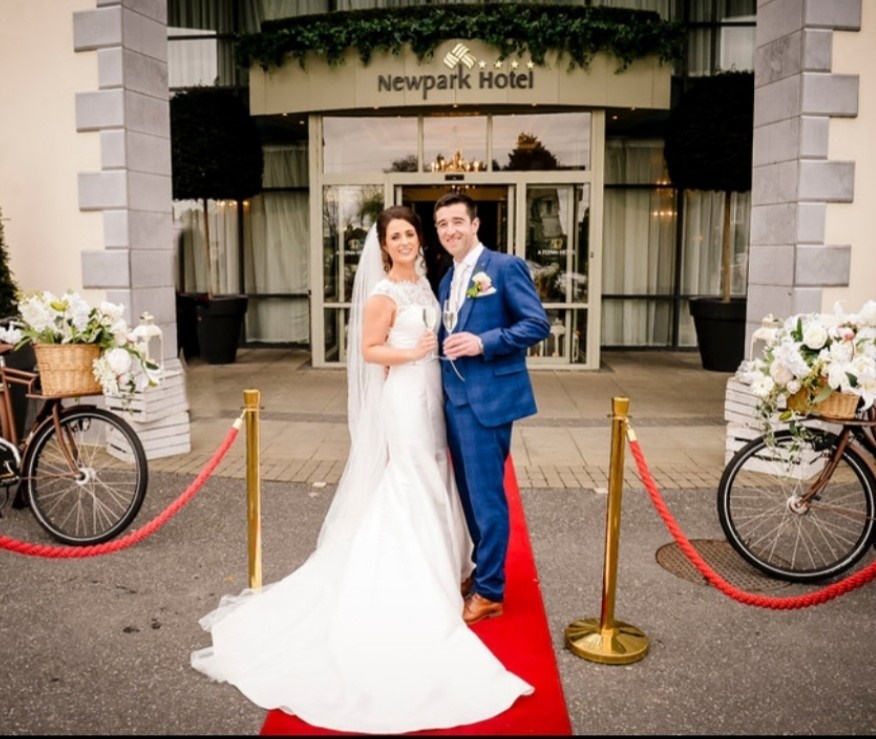 Donie is a romantic with a head for heights. He proposed to Maria on the top of a ferris wheel on Eyre Square in Galway. He got down on one knee and produced the ring, and that was only the beginning. On their wedding day in the Newpark he surprised Maria with a 7 ft tall sweet cart with their engagement picture on the front.

Not surprisingly Maria was delighted.

“It even rotated. It was amazing. And the hotel were so good in accommodating Donie, storing it, and setting it up for the big day”

Maria and Donie met through mutual friends. Then Maria’s best friend married Donie’s best friend. She was bridesmaid and he was best man.

They went to the Newpark wedding showcase in January, loved the ballroom and were immediately able to imagine their special day there. They found the staff helpful, friendly and efficient.

“We knew we would be in good hands. And it turned out that everyone went above and beyond to make the day perfect. Sinead, Nicky and Niall and all of the Newpark staff made sure we had nothing to worry about. It really is a top class hotel.”

And would they change anything ?

“Not a thing. It really was the best day of our lives.”

“It was the moment I reached the top of the aisle and Donie turned to look and me and we both just smiled at each other. I’ll never forget it.” 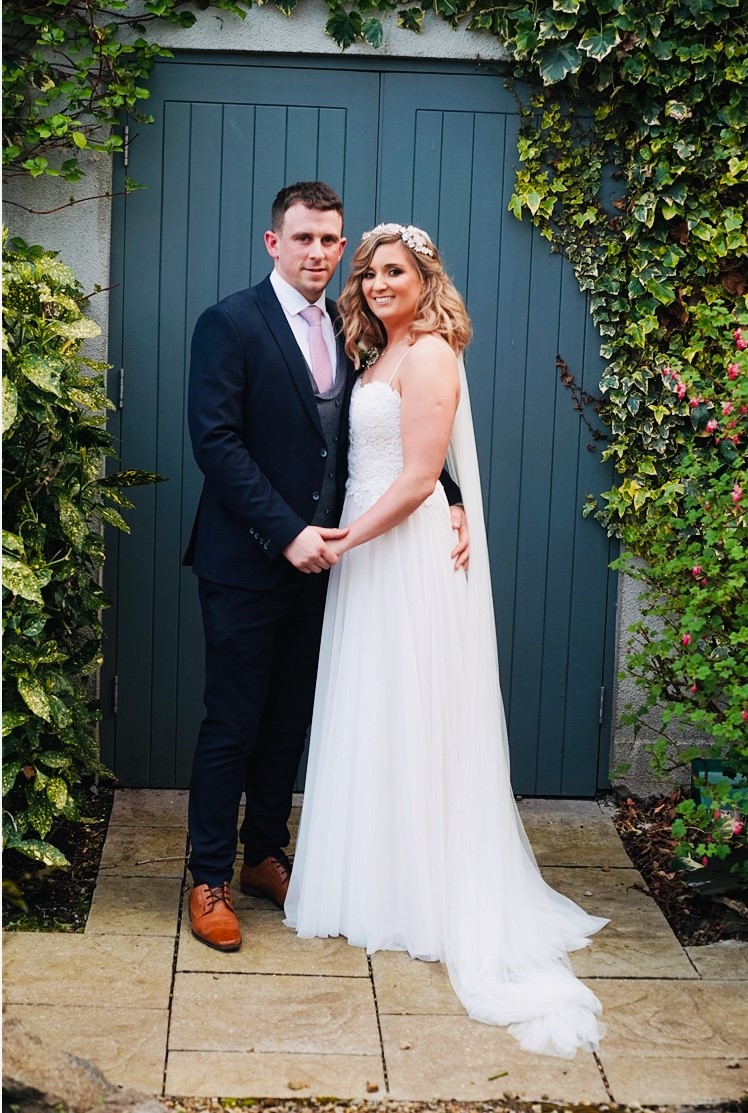 Sinead and Mark had been to a wedding in the Newpark and just loved it so never had any other hotel in mind for their big day. The couple grew up nearby to each other, went to the same school so always knew each other. But this true love burned slowly. It took two years from their first kiss for Mark to ask Sinead to the cinema !

For his 30th Birthday Sinead booked a surprise trip to New York. But it was Sinead who got the biggest surprise. Walking through the rain in Central Park Mark asked Sinead to marry him. She was in total shock, but did manage to say ‘Yes’ !!

Sinead says they are not a romantic couple. But not one morning goes by without a kiss goodbye. Mark regularly phones just to chat and see how Sinead is.

“Sometimes we could chat for my whole journey home. I live for that kiss and those chats.”

Sinead’s favourite memory of the day was walking into the hotel and having their pictures takes and seeing everyone having a good time.

“Newpark was just so easy to deal with and nothing was an issue. This made planning so much easier. There is not one thing we would change. We just had the most relaxed day and just didn’t want it to end.”